Thanks to all for turning out on Saturday, for yet another visit by our patron, unfortunately as he was an hour early, a lot of us missed the actual ceremony. This was the planting of a beech tree to commemorate our taking part in the Queens Commonwealth Canopy project. Big thank you to Luke and the council staff for finding a place for the tree and digging the hole and also to Jon for back filling it over night to prevent accidents. All we have to do now is to work out how it will survive as it is only 2ft high! 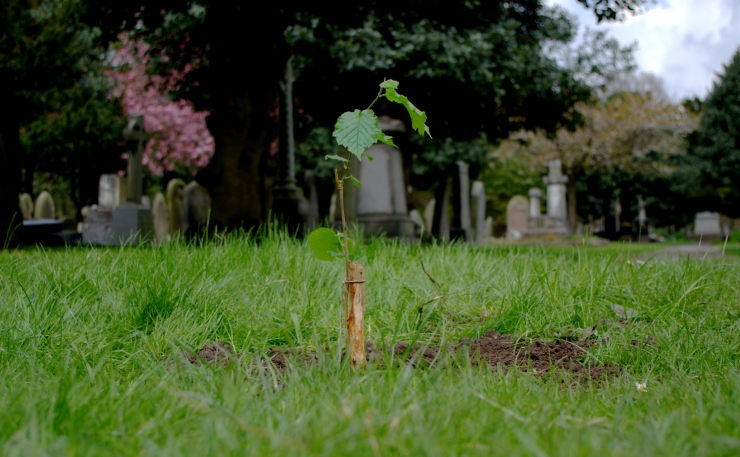 Over the past few weeks, in preparation for our first walk of the year, our regular volunteers have removed several tons of accumulated earth from the paths around the chapel, all by hand! Whatever the weather our volunteers turn out every Thursday and Saturday morning to help keep Flaybrick looking as magnificent as it does.

Over the next few weeks we’ll be adding a lot more information about the work our volunteers do, why we do it, and how you can join us. However, if you can’t wait to get involved then all you have to do is turn up at the Tollemache Road entrance just before 10am on any Thursday or Saturday morning and help us make Flaybrick Memorial Gardens even better. 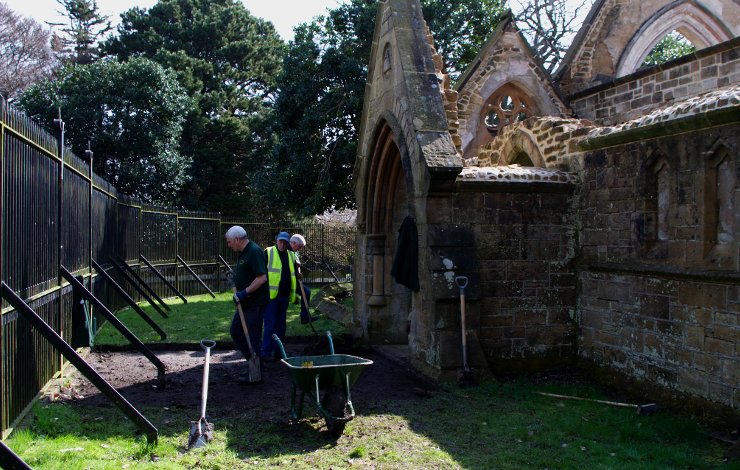 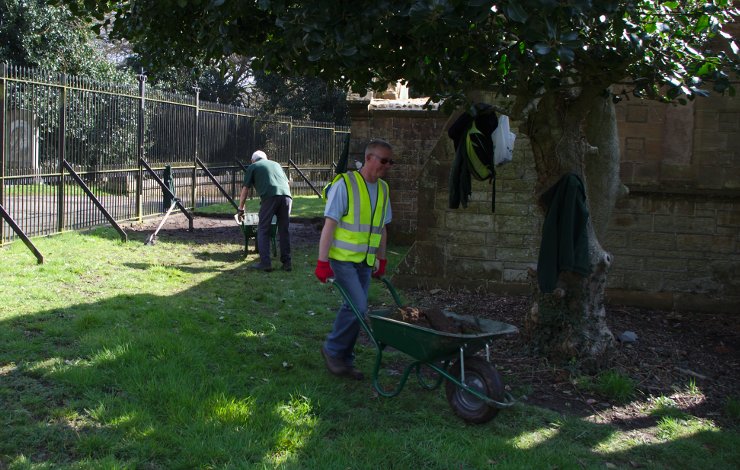 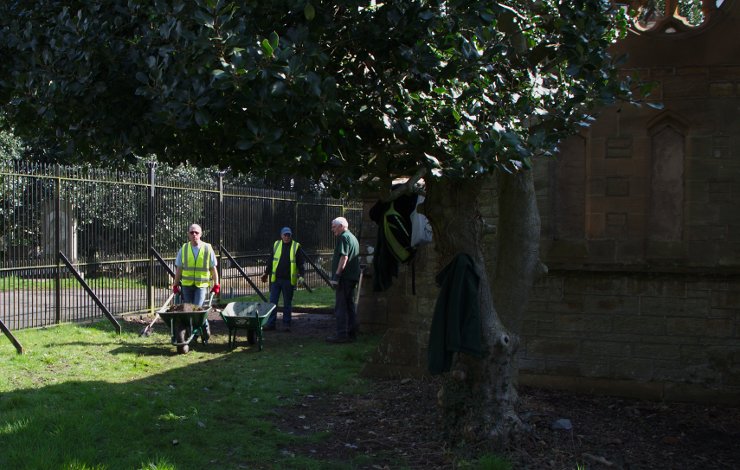 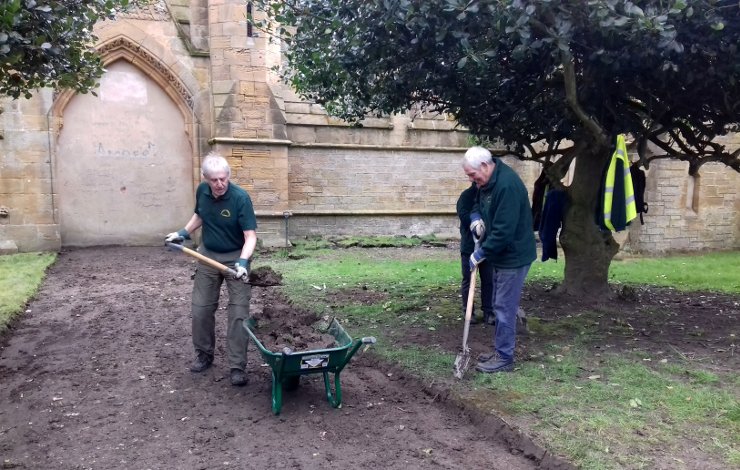 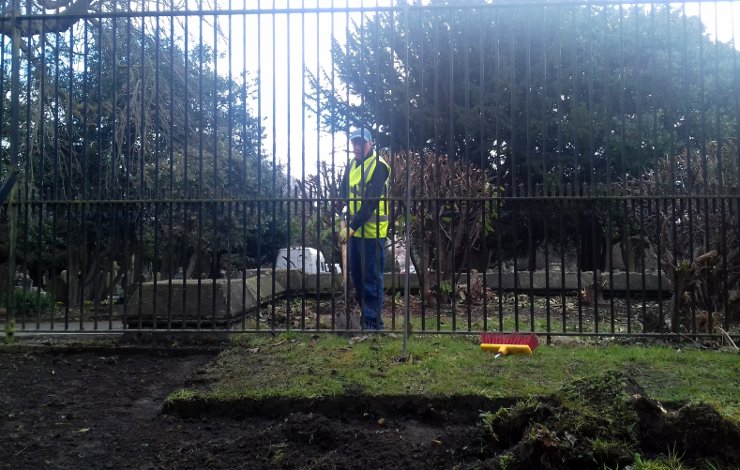 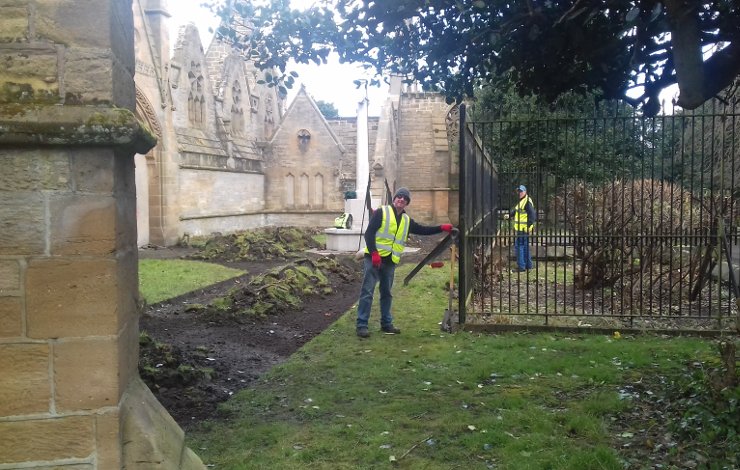 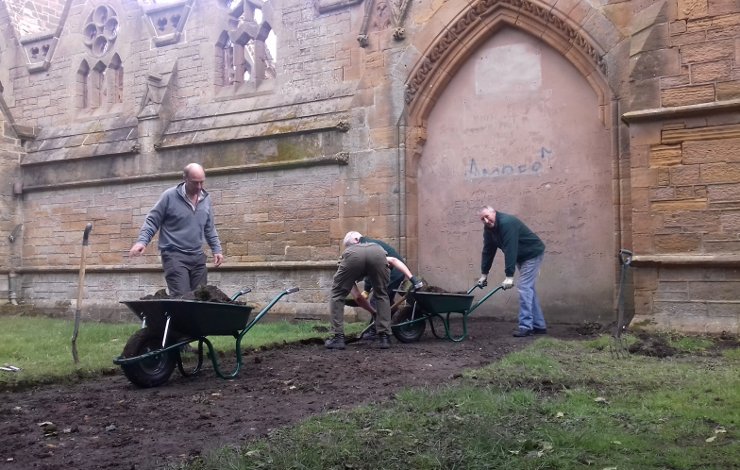 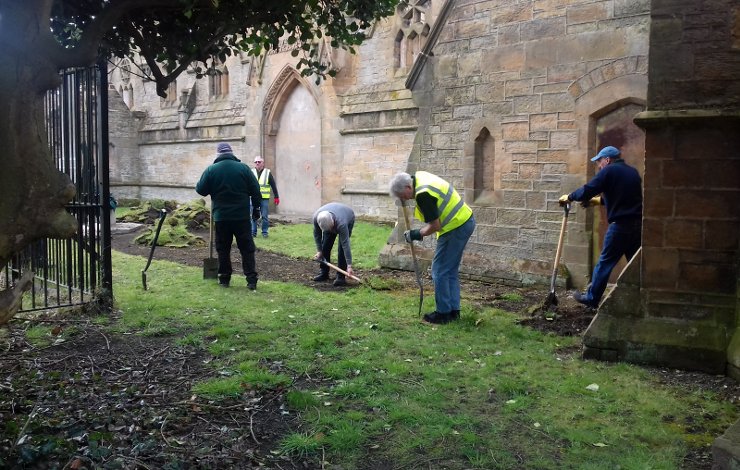 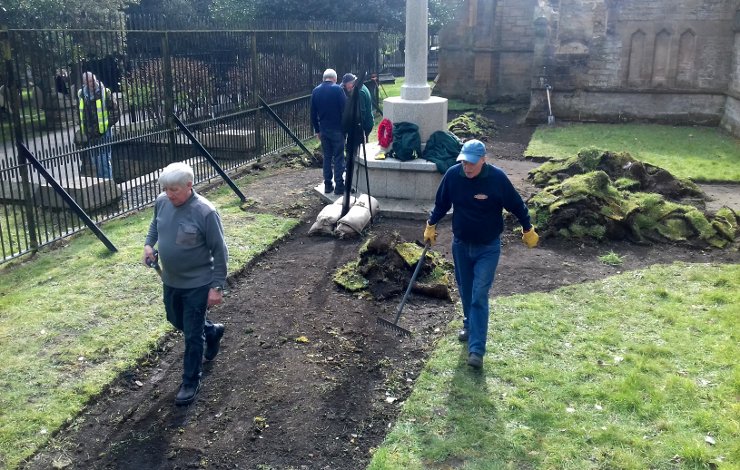 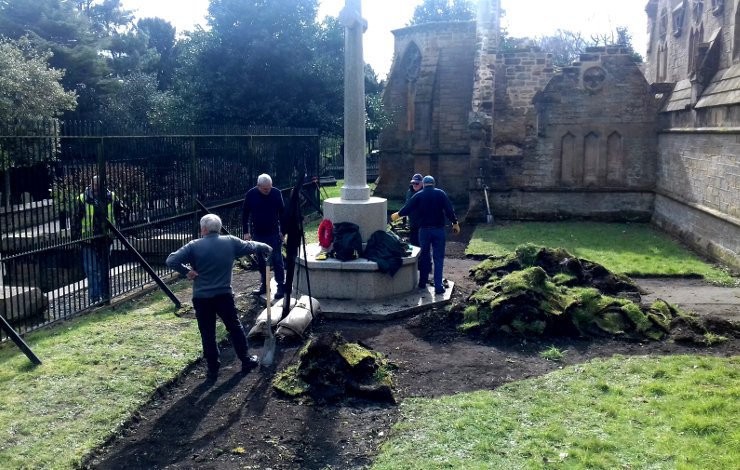 On 14th April, The Friends of Flaybrick held our first guided walk of 2018. Despite poor weather for most of the week, a fairly dry spell meant that although soft in parts, the ground wasn’t too bad for those who came along. We’d started the day with a welcome visit from the group’s patron, Birkenhead MP Frank Field, who enjoyed looking around the chapels and chatting to the volunteers about work we’ve been doing and what is planned for the year.

The sun started to break through as we were ready to go and as we started off at 11.00 am there were a total of 45 visitors who initially received a welcome from Daphne before joining Rob, Jayne and Chris D. to hear about a dozen or so of the people resting in Flaybrick Memorial Gardens. There were a fair number of volunteers working in and around the chapels and near the Founders’ Aisle so it also gave the visitors an opportunity to see what we get up to in close quarters.

The skies cleared as we moved around the site and we were eventually blessed with a beautiful morning which ended with the first chance this year to look around the partly restored chapels and to have a closer look at some of the old photographs which were on display.

Our next guided walk is scheduled for Saturday 19th May and further details can be found on our Guided Walks page. Any group wishing to arrange a private guided walk can do so by emailing walks@flaybrick.org. 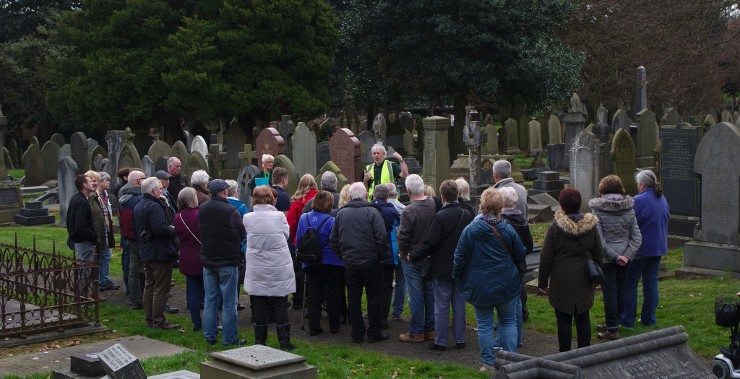 During a 45 minute visit our patron was given a tour of the chapel interiors and the Sword of Sacrifice areas. Inside the chapels he was introduced to the executive committee and grounds workers. He was particularly taken with the Minton tiles which looked great thanks to the cleaning they had been given by Jayne. He was shown an image of the chapel interiors before work started and said, “You really have achieved a great deal here”. However, he was saddened that the niche marble columns had been stolen. Rob told him about the decorative stone and the porte-cochere projects before he signed the visitors book and then went out to the Sword of Sacrifice area.

Looking up at the chapels he was taken with the dove symbol on the front of the spire, saying, “That’s the dove of peace descending through the sun’s rays.” Brian explained to him about the river of poppy’s plan which impressed him as it would lead down from the dove of peace. 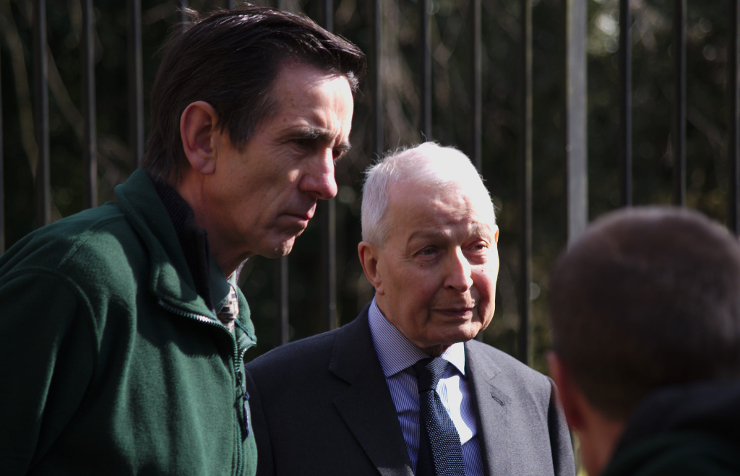 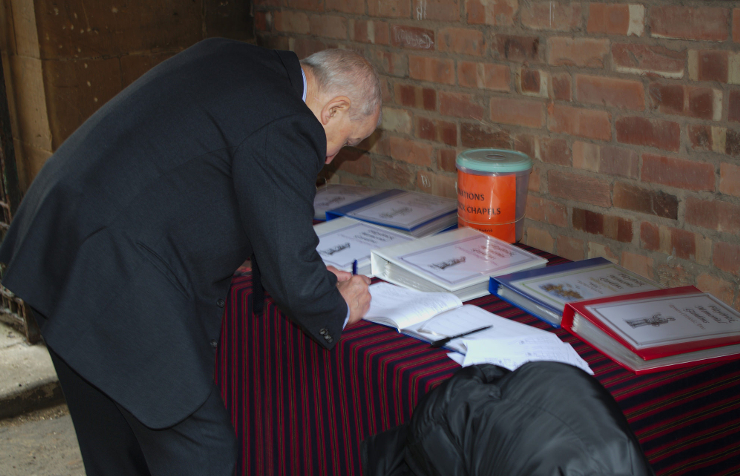 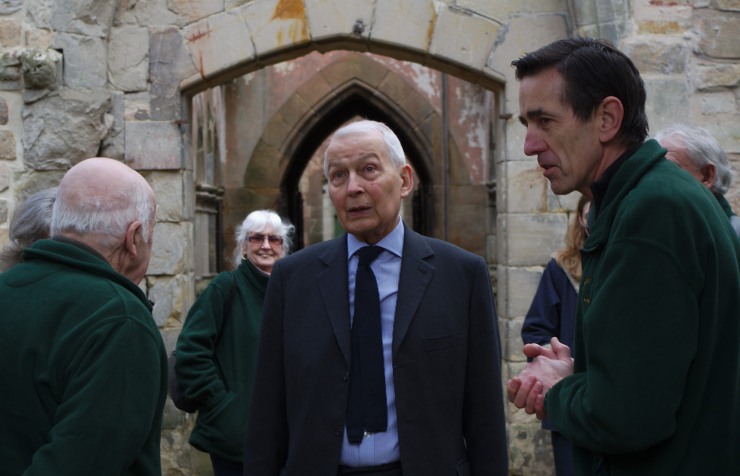 I had the chance to give him a full update on all our short and long term aims. Also, the strategic situation short and long term with our partnership work with the council and Historic England. That said he knew more than I did about the Magenta situation and the front lodge sale! Asking what we would do with the chapels if they were roofed I said we intended to become the Wirral’s centre for local, social and family history and a place were the value of trees can be demonstrated. He was particularly interested in the tree aspect and was impressed that we had 140 different species. He is involved in the Queen’s Commonwealth Canopy Project, which seeks to plant a tree in every constituency in the commonwealth and said he would like one of the trees to be planted in Flaybrick, (more detail on this can be seen on ITV on Monday at 9pm in Green Planet) and I said we would welcome that.

Frank has now been our patron for 15 years and it has been 10 years since his last visit. I asked him what difference he could see. He said, “the improvements are very clear, the friends have made things are much better”. His support staff said that they would be happy to push things along for us if we have any problems getting things done. As he departed I thanked him said his visit had been a great boost for us.

So all things considered, (weather included), it was a great day for us and we have all done well in helping to make the visit the success that it was. 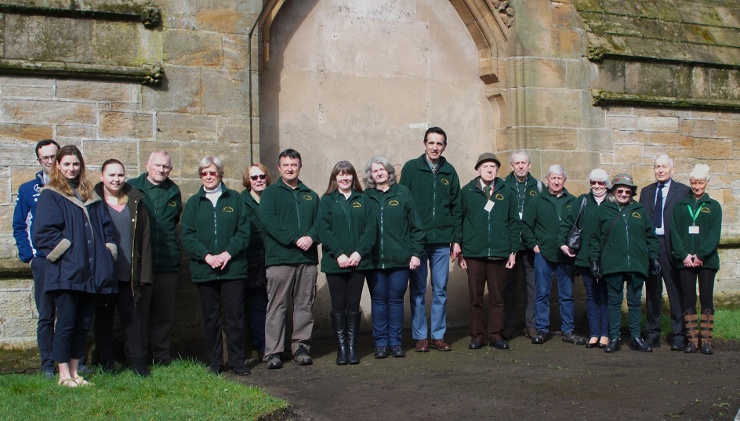 Come along and join us for the first of our 2018 programme of guided walks when amongst others you will hear about a civilian victim of the HMS Thetis disaster, one of the founding fathers of Tranmere Rovers and the man who became known locally as the King of Birkenhead. We will also be talking about an internationally renowned artist and one of the architects who helped bring Flaybrick into being.

As well as the walk around the memorial gardens, there will be the first opportunity this year of looking inside the ruined chapels and hearing about their creation.

The cost per person is just £2 and visitors should wear footwear and clothing suitable for the conditions on the day.

The full 2018 schedule can be viewed on our Guided Walks page.

Tweets by FlaybrickFriend
We use cookies, just to track visits to our website and provide social media services, we store no personal details. Using this website means you're Ok with this. Find out more.